In October 2019, Loretta Lopez was appointed by Gov. Lujan Grisham to serve as Director of the New Mexico Workers’ Compensation Administration (WCA). She is the first woman to be appointed to that position. Lopez attended the University of New Mexico, where she earned a bachelor’s degree in nursing in 1982, and in 1989, she earned her Juris Doctorate degree. Lopez has 30 years of legal experience working in state government and private practice.

Leigh Martinez  has been an employee of the WCA since 1996, working as a financial auditor in the Self Insurance Bureau and then as an economist in the agency’s Economic Research and Policy Bureau. Prior to joining the WCA, Martinez was financial manager for Sandia Casino. She has a bachelor’s degree in business administration, with a concentration in accounting from the University of New Mexico. Martinez oversees the WCA’s support services, which includes the bureaus of Finance, Facilities, Safety, Field Programs, Medical Cost Containment, Economic Research and Information Systems. 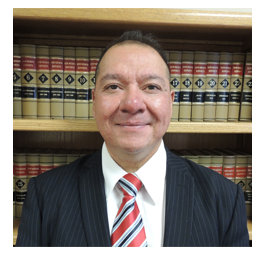 puty Director. Owens is a native New Mexican and a graduate of New Mexico Military Institute, where he received his commission as a United States Army officer. He is a Persian Gulf War era Army veteran and served as an Air Defense artillery officer. Owens has a long history of helping others resolve their conflicts in a way that is ultimately beneficial for all parties. After his military service, he worked as a community organizer for El Centro de la Raza in Seattle. He returned to New Mexico and graduated from the UNM School of Law in 2011. Owens has worked extensively in state government, community legal services and in private practice, including assistant New Mexico attorney general and as an employee at New Mexico Legal Aid. Owens joined the Workers' Compensation Administration in late March 2018. Owens oversees the bureaus of Adjudication, Mediation, Ombudsman, Self-Insurance, and Clerk of the Court.

Michael Holt graduated from Northern Arizona University in 1984 with a degree in geology and received his law degree from the Marshall Law School in Chicago in 1990. Holt was in private litigation practice in Illinois for 27 years with a focus on workers' compensation and personal injury. Prior to his promotion to General Counsel, Holt was the WCA Enforcement Bureau Chief. Holt began as General Counsel in February, 2021.